A friend told me about a charity softball tournament for the Flint Hills Foster Teen Camps that was happening this past Saturday. However, I misunderstood the conversation just a tad and thought she asked us to be on her team. I didn’t really ask for super details at the moment. I heard ‘free softball’ and ‘free t-shirt’ and I was there!

What really happened was she had given me the number of the event coordinator and he put together a team of random misfits (which is what everyone called us, even though there was actually a team called The Misfits).

After waking up at 6:freaking:30 on a Saturday morning, we got our morning shake, picked up Justin’s brother and headed to Anneberg Park.

We got our fun shirts and waited for the rest of the team to arrive. We didn’t know who they were, just that they had signed up to be on a team. It turns out they were a pretty fun group of people. We played at 8, 10, 11 and 2. 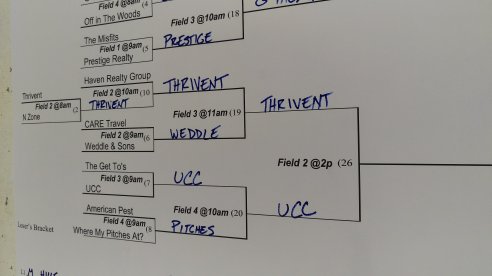 It was pretty brutal. It’s been a few days and my legs are still so incredibly sore. I’m hoping after a couple more days they will be back to normal. 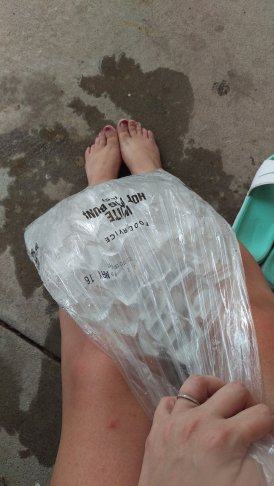 My shins were in crazy pain after that many games of softball!

No one was actually expecting us to win, but the underdogs rule! However, by the time our 4th game came around, we were all pretty toast. We were down a girl, our first base-woman had a recently healed broken arm, our pitcher was practically throwing up from heat exhaustion, you get the point.

We lost, which we were kind of okay with. We moved to the loser’s bracket where we would have played the team that we run-ruled earlier in the day. We decided to give everyone a break and just forfeit. I haven’t checked, but i’m hoping that they ended up playing the team that beat us in the championship.

It was so much fun though! I really do love softball. I love the..sportsmanship, the skill (which I don’t particularly have), and all the other things I can’t really think of right now. Oh! The hot dogs! I absolutely love concession stand hot dogs.

The Chef is in the House

Anyways, after we got home, cooled off and showered, Jason (the brother from another mother, as I so fondly call him) came over to make some…Bacon Wrapped Jalapeno Popper Stuffed Chicken!

He started with the jalapeno stuffing…. Sour Cream, Cream Cheese, shredded cheese, and some seasoning.

And then he took care of the spicy, spicy jalapenos.

Mind you, I say spicy twice because I have weak taste buds. Almost everything is spicy to me. Next came the chicken. He cut a slice in the middle and somehow managed to get the jalapeno in there.

Are you guys ready? Are you? This next step is the best. The best best best!

Oh my gosh. It is impossible to describe how much I love bacon.

I love it so much, it got it’s own picture!!

Anyways, back to the point. He then wrapped the chicken in bacon!!!

We smoked them for about 2 hours, even though it felt like 20.

The end result though was amazing!

Yeah, the lighting is a little weird. Still trying to figure it out.

Look at this cutie!!…who absolutely HATES having his picture taken.

I love just holding my camera out and clicking a picture, seeing what happens. Which is how this came about…and then I realized, dang! my skin looks amazing. Thank you water (which I have recently started drinking a normal amount of after spending most of my life dehydrated).

But my God he is lucky to be married to me!!

I also might need to paint my toenails again……